On Sunday, January 17, 2021, at 9.18 a.m., we received an invitation from a local resident that someone had run away and was moving in the bay on ice. At 9.25 the information was confirmed by 112 — HZS and we were asked to cooperate. At 9.30 we rode a quad bike to the place where the horse was last seen, but from the hill above the Vltava we saw that the horse was moving in the middle of Lipno between Lukavická and the Austrian Bay, which we did not want, because there is thin ice in this area and there is a risk of breaking . We contacted the fire brigade and agreed to return to Dolní Vltavice and follow the horse on foot through the ice, because the ice would not carry the ATV in these places.

At that moment, what we were afraid of happened — the horse broke through and fell into the water. When we arrived at the place after +/- 15 minutes of walking, the horse was still stepping calmly on the water and keeping his head above the surface. One rescuer of VZS ČČK ČK tied himself to a rope and with protection, crawling on the ice got to the animal, found out its condition and whether it is possible to fix the animal for something to help it stay afloat. Unfortunately, there was no such possibility. In the meantime, the HZS unit from Frymburk and the manager of Lipno Line arrived with additional material, and the fire brigade took command of the event. Using an inflatable footbridge, they approached the animal and secured it with ropes.

The Police of the Parliament of the Czech Republic also arrived from Horní Planá and joined the rescue with everyone else. We tried to pull the horses out of the water with the help of ropes, but by the way he tried, all the efforts of the rescuers were in vain, because the horse was still collapsing into thin ice (less than 10 cm at the breakthrough). Only when the horse was exhausted and it was possible to tie his legs so that the rescuer would not be kicked out, it was possible to pull him out with great effort in several attempts. But the moment the horse wanted to stand up again, the ice beneath them all began to crack again. So we decided to drag the horses as far away from the hole as possible. At this moment, the commander of the VZS ČČK ČK rescue team with the Snowdog universal propulsion unit arrived. After several attempts, we rolled the horses onto the dropped footbridge, secured it, covered it with thermofoil, harnessed it to Snowdog and, with the help of all rescue services, began transporting the animal to the lower Vltava river, about a kilometer away, where the owners and veterinarian were already arriving.

During the transport, Antonín Labaj arrived on foot with blankets to help — the administrator of the ice highway, who came to the rescue with an eight-wheeled special vehicle, but due to the thickness of the ice it was not possible to use it. After 15 minutes of brisk running with a load of about 400 kg, we successfully pulled the horse to the shore, where it began to dry out and warm up, so that the grasshopper named Zoja at 11.45 to the applause of all onlookers successfully got to his feet…

After the rescue operation, we returned to the scene of the accident and secured it with warning tapes.

(photo is for illustration only) 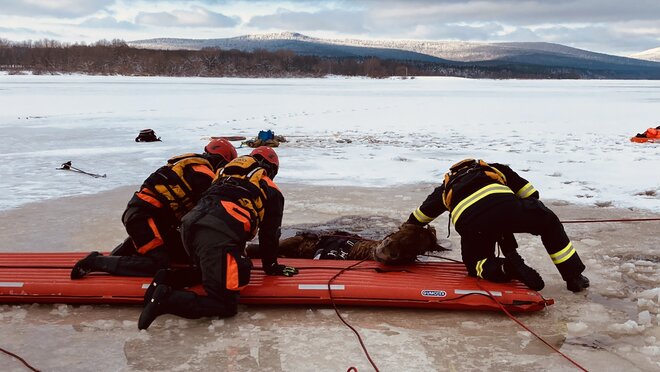